I don’t really “hate travelling and explorers” if I may play on the opening line of Tristes Tropiques—but to tell the truth, I’m not wild about them either. It takes a great deal of patience to convince me to go anywhere, even if it’s not far away. I am quite content curled up in my armchair, at my desk. This homebody inclination of mine enrages my loved ones. Once on the road though, I’m not always unhappy to have been persuaded to leave. Although I may baulk at the fuss of getting ready and packing bags, although this flurry of logistics around departure makes me miss the tranquillity of sedentary life, I don’t usually complain about letting myself be swept along. “See? It was worth it!” And, grumbling, I nod. Could it be that I’m happy? That something has opened up in me. Despite these considerations, it seems to me my private utopias have greater pull; ambivalence prevails.

I’m not much of a traveller, as you can see. There is no arguing that this time of confinement is beginning to weigh on me. I’d be happy to go sit at an outdoor café close to home. (As I review these lines, it has only just become possible again!). And after that promising start, I wouldn’t mind going to visit this Mitteleuropa I know so little about and have been too slow to visit, where my great-grandparents come from; I would follow the Danube, as Claudio Magris urged—though my own journey would have to include the Oder and the Vistula as well. But truthfully, if I ponder the inner place I aspire to reach, I can’t help but think of a troubling letter by Kafka.

“I have often thought that the best mode of life for me would be to sit in the innermost room of a spacious locked cellar with my writing things and a lamp,” Kafka writes in a now-famous letter to Felice Bauer in 1915, “Food would be brought and always put down far away from my room, outside the cellar’s outermost door. The walk to my food, in my dressing gown, through the vaulted cellars, would be my only exercise. I would then return to my table, eat slowly and with deliberation, then start writing again at once. And how I would write! From what depths I would drag it up! Without effort!”

This image of Kafka’s has long fascinated me.

Death, rebirth. Isn’t this the phantasmatic trajectory of all initiation journeys—to the point that, in Kafka, it converges with fundamental uncertainty? This theme can be likened to a primordial grotto; a place of provenance and destiny, spatial and temporal, through which innumerable myths have passed. That a foetus possesses knowledge, which it forgets in order to be born, is a theme woven through Plato’s Myth of Er, the Talmud and other literature. It appears in very different forms and is shaped accordingly. There is a temporality in the haze of childhood that only arises in its aftermath. The journey is to follow a far-off, yet-inaudible call which is only so to be transformed.

During the war, when my maternal grandmother was the age I was on my first travels, where was it that she hid? What I mean is that I know to whom she owes her life, to what heroism—the memorial of the Righteous of Yad Vashem stands as testimony—but from a material point of view, in that modest house in that French village, what did the room look like? The question seemed to have been hanging over me, I now realize. And my other grandparents, what were their refuges like? I’m coming up against the barriers of history, against the journeys of memory I put off until I was ready. You can’t be an Ashkenazi Jew whose grandparents had to flee during the war for a chance at survival and summon the Kafkian imagination without trembling. But wasn’t I also, despite my very sheltered existence, trying to protect myself from some threat? Where did this come from? The planes are superimposed; the psyche is overshadowed by a dimension greater than itself. Proceed with caution, here, so as not to give way to the indecency of identifications.

Kafka’s cellar, in other words. But I have within me another private utopia that is wide open. Not some fevered call ringing out in the distance, nor the exoticism of great and perilous journeys, but simply a gap that seems, at times, to suggest a fork in the road, for it gives the instantaneous feeling of being in another place. Not necessarily a peaceful feeling, but desirable, touching as it does on the imminence of the enigma. Once again, ambivalence. These sudden gaps can open up in even the most mundane of daily moments. When this happens, I sometimes venture a few lines to try to translate a bit of the jolt, to prolong it.

an aerial rises from the tree line

in perfect alignment to the nearly empty street

a child’s cry behind me

the hilltop is crowned by a slab of buildings

an early block of shadow thrown there

that hastens the night.

At first glance, the two motions oppose each another. Over here, the confinement of some enclosed, separated space; a more agreeable version would be the Proustian cork-lined bedroom. Over there, not a fixed, cloistered place but the outward thrust of the unknown itself, continual renewal. Stasis, in contrast to the vanishing point. And yet, these polarities exist in symmetry; their opposing movements complicate one another, but they mark the pulse of a shared desire, a certain thirst for adventure.  One that writing can fulfil.

My first book, Le détour, came out in March. Publication was postponed because of the first confinement. I started writing in my teens, so it’s taken me a while. But what was this “detour” I spoke of? What meaning did I intend for it? It’s tempting to interpret it, mutatis mutandis, as the slow process of preparing to write, along the path that led from the young Marcel to the author Proust—the story-within-a-story narrative of the writer’s journey which has infused so much of French literature. But this would be to grant a kind of truth to the writing that is no longer permissible post-war. Who would still believe it? If literature can no longer be “real life, life finally uncovered and clarified, the only life in consequence lived to the full,” as Proust says, in a famous and magnificent phrase at the end of In Search of Lost Time, it’s because the path of writing must curve elsewhere. But where? And what clarity might, despite everything, still be gleaned there?

When it comes down to it, the course of writing, the journey of it, may open up an inner space, but it may also open up time, bringing focus to some piece of the temporal fabric, to some wrinkle of human temporality which the structure of the words themselves connects with, in their address to the other.  We are perhaps not very far from an idea, not of messianism, exactly, but something we might call the messianism of time. I’m reminded of a book I read long ago by Gérard Bensoussan in conversation with Levinas, Derrida and Rosenzweig. The Jerusalem of next year, for a French Jew, although secular, may be a metaphor for this.

I think back to coming home from the synagogue with my grandfather in the evening after the first service of Kippur. The years merge together in rustling silence. We walk side by side, separated by a quiet affection, a slightly aloof respect, and the vertigo of time. He seems to be watching for something; waiting for the indefinite, hoping for the unhoped-for: the utterance of a word that would finally be right, addressed to the one who will come. Tonight, I lift my eyes from the page. I look towards the half-light at the threshold of a room’s half-opened door; I know a child is sleeping there. Tomorrow, I will hold his hand on the way to school and we’ll chat a little; we’ll talk about the trip I’ve promised him, once he is five years old, which he is counting on. And through his halting voice, I may be instructed on what it means to journey. 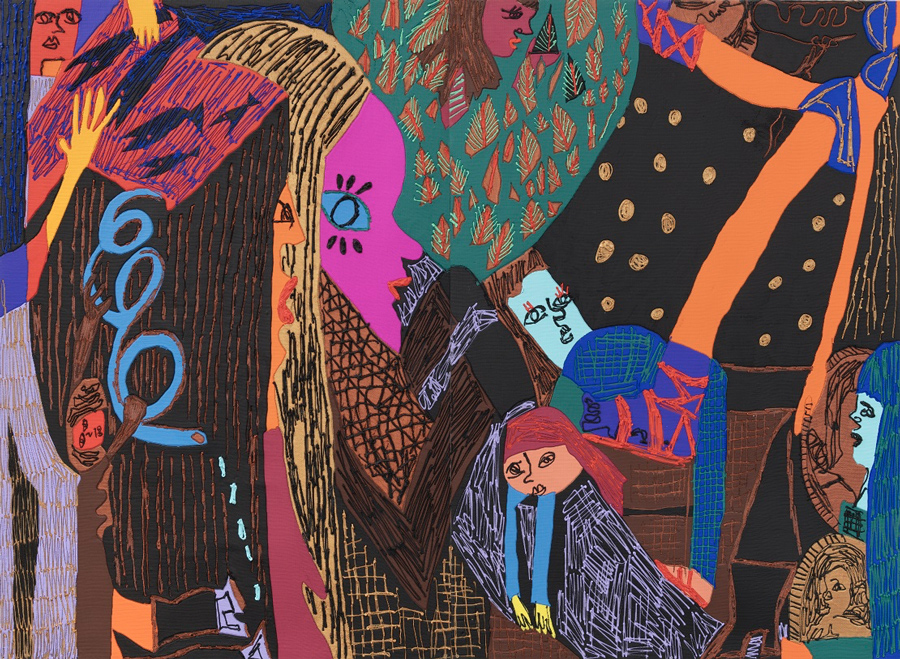 THE CHERRY ON TOP

Next year at Auschwitz